For news, updates and alerts, go to the coronavirus (COVID-19) website.

Issues with flooding in the Darwin region are largely dependent on locality. A number of areas have historically experienced flooding associated with unmitigated stormwater flows.

The department is undertaking the implementation of the recommended measures as per the committee's report for the following key areas:

Flooding can occur in the Rapid Creek catchment when heavy rain combines with high tides to cause flood water to back up into the creek and flood low-lying properties.

During Cyclone Carlos in 2011, approximately 67 properties were impacted by inundation of floodwater from Rapid Creek.

The Northern Territory Government is working to alleviate the impact of flooding in the Rapid Creek catchment.

Construction of a detention basin, combined with other flood mitigation measures, will reduce the impact of flooding on downstream properties.

A detention basin will be built on the corner of McMillans Road and Henry Wrigley Drive in Marrara to temporarily hold stormwater flows from Anula, Moil and parts of Marrara.

The construction tender was re-released in early 2018 after low levels of Per- and Polyfluoroalkyl Substances (PFAS) were identified within soils at the detention basin site.

The Department has undertaken environmental testing in accordance with the National Environment Protection Measure (NEPM) guidelines, which has shown soils within this site to have low levels of Per- and Polyfluoroalkyl Substances (PFAS) present, significantly below the Health Based Guidance Values for PFAS. Management of excess soils from this project will be undertaken in accordance with independent environmental advice and endorsed by NTEPA.

The design of the basin seeks to retain as much native vegetation as possible, with land to be cleared for the perimeter embankment only, while the excavation for the basin floor is in the previously cleared part of the site. When complete, the basin floor and embankment will be grassed to stabilise it against erosion and promote infilitration to groundwater, while remaining free draining, detaining water generally no longer than 24 hours after a large rainfall event.

The basin is designed to slowly fill from the inside out (see image above) and at capacity will detain water in a large Q100 rainfall event (i.e Cyclone Carlos) with outlets fenced for safety reasons. On completion the primary purpose of the area will remain as open space given it will remain dry when it is not raining.

Construction of the detention basin is expected to be completed at the end of 2018.

An early warning system has been put in place to help residents prepare for the risk of potential flooding and enable them to activate their emergency household plan.

For more information on how prepare a household emergency plan go to securent.nt.gov.au.

River height information for Rapid Creek can be found on the Bureau of Meteorology’s website.

NT Airports has committed to undertaking flood mitigation works to manage stormwater runoff from the Darwin International Airport as recognised in their master plan 2017.

The Department has worked with Power and Water Corporation to install back-flow prevention devices into homes that are at risk of sewerage inundation during heavy rainfall events.

Rapid Creek is a well-functioning system and will be retained in its current state. A strategy has been put in place to ensure the infrastructure in the creek, such as culverts and bridges, are maintained and continue to work efficiently.

The Mid Suburbs Area Plan allows for the provision of a special use zone for properties that remain impacted by potential flooding in Rapid Creek. The department has undertaken the necessary flood study within this area to facilitate the introduction of a special use zone into the Planning Scheme, which is to allow impacted properties to redevelop their property so that the minimum floor level is above the flood level. This can only be done subject to certain planning conditions. For more information refer to;

The suburb of The Narrows sits within the relatively large but heavily developed Ludmilla Creek catchment and has experienced flooding frequently since 1990.

The Department of Infrastructure, Planning and Logistics has completed the following flood mitigation measures in partnership with the City of Darwin and Department of Defence to minimise the impact of flooding in Ludmilla and the Narrows:

There are significant issues with drainage in the Yarrawonga industrial areas, with flooding occurring in relatively small rainfall events.

The Northern Territory Government is working to alleviate the impact of localised flooding in the Yarrawonga catchment.

The flood mitigation measures include:

The City of Palmerston has upgraded Yarrawonga Road and Wallaby Holtze Road including upgraded drainage.

The Department of Infrastructure, Planning and Logistics will upgrade stormwater drainage on Tulagi Road, which is expected to commence in the later half of 2018.

Stormwater drainage is expected to be upgraded in the western area of the industrial estate, near McKenzie Place, by late 2019.

Flooding occurs around Wadham Lagoon in Howard Springs with a number of private properties affected during large rainfall events.

The Northern Territory Government is working to alleviate the impact of localised flooding in the Wadham Lagoon catchment in two stages:

The Wadham Lagoon flood mitigation project will increase the capacity of trunk drainage to cater for flood stormwater flows in large rainfall events. The flood model over this catchment will inform assessment of future developments in the Howard Springs activity centre to manage stormwater to pre-development flows. 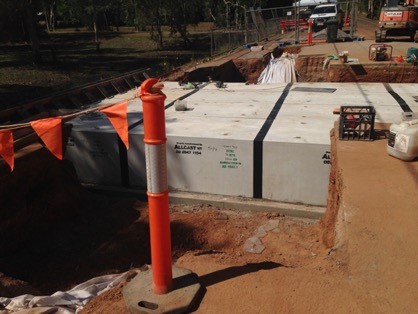 Stage one has been completed with new culverts installed beneath Whitewood Road in mid-2017 (see image above).

Stage two is expected to be completed by the end of 2019.

During Cyclone Carlos in 2011, significant flooding of properties occurred in Lorikeet Court in Herbert.

Investigation and analysis of the catchment is currently in process.

A number of rural properties are impacted by inundation during monsoonal rain and cyclonic storms on the Elizabeth River.

Investigation and analysis of the catchment is currently in process.

Related information
Back to top